It has taken me a month to digest the tournament weekend involving my 2010 and 2011 boys teams. All told, my teams gave up a collective 76 goals in 7 games. One could argue that I am a poor coach, or my players are not competitive (although the 2010s are currently in third in their regional Bronze league), or that we were subject to the unluckiness that can occur in a game (for example, the “best” 2010 goalkeeper missed 3 of the games due to injuries and absence).

A more fundamental question is why a series of coaches would see fit to allow their teams to run up the score against my players and the format of a tournament that would allow this to take place with 7- and 8-year old boys. Or, why players in these age groups are playing in “competitive” tournaments with scores, rankings, and awards.

The high(low)light occurred in one of the 2011 games. With the score 10-3 early in the 2nd half, the opponent – who had decided to try to possess to avoid running up the score but gave up 3 sloppy goals – elected to return to a high press on our goal kicks: 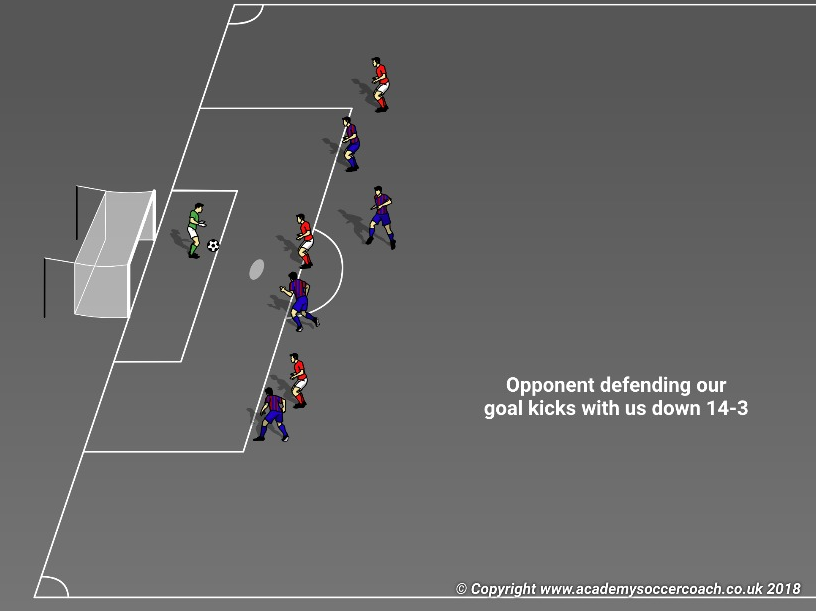 The obvious result was 5 more goals scored. With no offside rule and no build-out line for the 2011 age group, coaches who were content to watch their players continue to score despite the goal difference, and bringing a collection of mixed 2011s and 2012s, the outcome of the weekend should have been obvious from the beginning for my team.

The 2010 team suffered a different fate – hanging close for the 1st half in two of the games, giving up a couple of early 2nd half goals followed by full capitulations. The other two games were complete mismatches – Gold-level teams playing against my Bronze players.

So what is the point of competitions for younger players? Should we celebrate the win-loss record of a team of under-8s?

Research in the area of Long Term Athletic Development (LTAD) describes a decomposition of stages, each with characteristics and objectives within age groups (Balyi, Way, & Higgs, 2013). A primary area focus in the younger ages should be motor skill development – agility, coordination, balance, propriception. The elements of motor skills can be deconstructed into categories of athletic stance, body management (effort, space, and body awareness), and efficacy in the three dimensions of movement – many of which are applicable to soccer athleticism (Howard, 2018). As players transition into the 9-12 age group, the focus shifts to sport-specific skills and ancillary capabilities such as “warm-up and cool-down, stretching, hydration and nutrition, recovery and regeneration, mental preparation, taper and peak, integrated precompetition routines and post-competition recovery” (Balyi, n.d.).

How we might apply LTAD theory into younger age group soccer training models and methods for developing players at the early grassroots stages are topics for future postings.