The moral dilemma of defending goal kicks in the 7v7 format

Except that it is not a moral dilemma at all.

With the changes to the 7v7 format and rules a few years back, defending teams are required to be no closer than a build-out line on goal kicks and with the goalkeeper in possession of the ball. Once the ball is in play, the defending team may come forward. The intent of the build-out line rule is to provide a buffer zone for attacking teams to begin an attack without an immediate turnover and goalscoring opportunity.

Over the last few weeks, I have seen some opponents press large numbers on the build-out line hoping to win the ball in the attacking third as soon as it is played. From a win-oriented results perspective, it can appear to be a desirable strategy. The picture looks something like this: 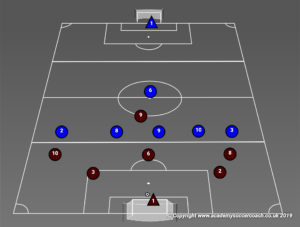 I think this is wrong for a couple of reasons.

First, the shape (a 1-1-5) does not represent how we want to develop defensive tactics. In this picture, a ball through the line of 5 players results in a 1v1 to goal. Ideally, we want to create situations to encourage the adoption of 1st/2nd defender roles (pressure/cover).

Second, as caretakers of the game, it is important that we as coaches encourage game forms that strengthen the game as a whole. Creating situations in which opponents are required to sit deep in order to defend the possibility of a mob rush on goal kicks diminishes the game for both teams. The use of layered defending outside of the build-out line provides both teams with affordances for development.

An alternative strategy that I’ve observed, which has me scratching my head, is what I would call a 1-2-0-4. It looks like this:

Once again, the large spaces between lines don’t allow a layering of defenders. Balls into the gap between the lines allow for counterattacks with numbers.

This allows for 1st defender pressure, with coverage from the other lines. As the players get older and stronger, goalkeepers will be able to penetrate the first line of 3 with a single pass to the space beyond the build-out line. In response, I would look for our team to sit back a little bit and cover this possibility.