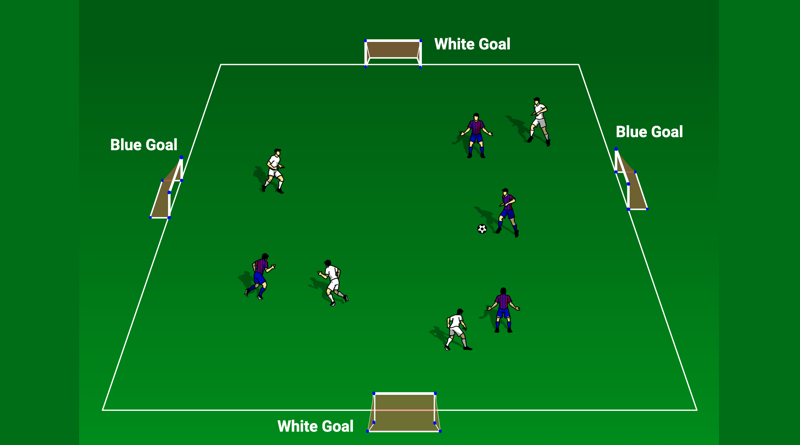 This essay is taken from the UC Premier curriculum courses (all levels).

An SSG can have even (example, 4v4) or uneven numbers (example, 6v4) or can have neutral players (example, a player who is always on the team that has the ball).

SSGs can also include conditions (“constraints”) that will affect how the players respond to the game. For example, players may be instructed that they can only touch the ball a certain number of times before they must pass or shoot.

The purpose of the SSG is to provide some set of problems that players must face in the real game and create opportunities for players to solve those problems.

An SSG can be used for technical (skills) and tactical (strategy) development. It can also be used to develop mental abilities – resiliency, decision making, and courage.

With proper structure, SSGs can also be used to develop physical abilities, including endurance. Setting the time constraints for work and rest (how long each game lasts and the rest periods between), the number of players, the size of the game, number of goals, and how many repetitions of each game can result in the creation of high (or low) intensity work rates for players.

Here is a list of variables in SSG design:

Note that the age and ability level of the players must be considered when designing an SSG. For example, attempting to design a game in which players are only allowed 1-touch requires a high level of skill. Likewise, designing an SSG with an overly large amount of space may limit the opportunities for players to develop their ball receiving skills.

Note that 1v1 is the most basic version of an SSG.