In previous articles in this series (1 2 3 4 5 6), we introduced the 9v9 format and a game model, with a focus on the 2-5-1 system of play. In this article, we discuss tactics when out of possession in the middle third.

In our article on possession in the middle third, we provided a definition of “middle third” based on the field size modifications for 9v9.

This diagram illustrates the region of the field that we are discussing. 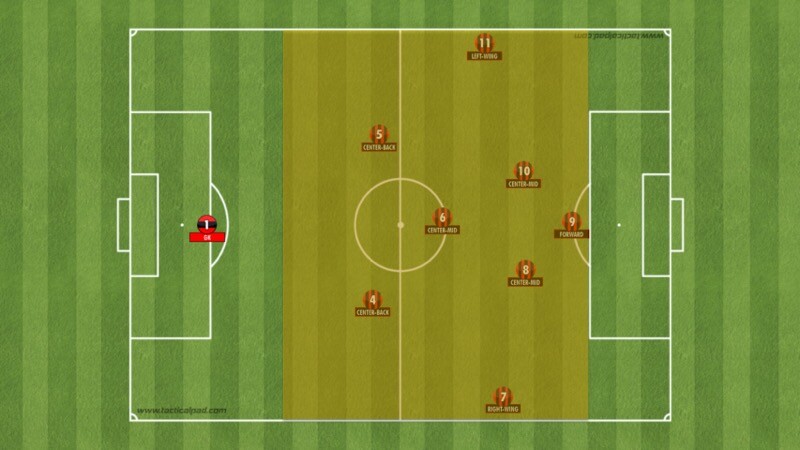 A premise of this series of articles is that there are distinct moments of the game – in and out of possession and transitions. The loss of possession by the attacking team in the middle third presents particular problems.

Transition goes through a series of phases as the opponent secures the ball and organizes its attack. In response, our team must organize more rapidly in order to prevent opportunities for the opponent to penetrate and create goalscoring opportunities. Our ideal response in loss of possession is to win the ball back – the nearest defender stepping in before the opponent has a chance to secure the ball.

In this scenario, the opponent is able to secure possession in the middle third and our team must develop its response.

Our immediate objective is to prevent the opposition from entering our defending third, most importantly with numerical or tactical superiority. We use the phrase “tactical superiority” to describe a situation in which a team may not necessarily outnumber its opponent but the positioning of its players creates opportunities to succeed in the situation – for example a player who is 1v1 in an area of the field that can result in a shot on goal.

Our second objective is to recover possession and initiate our own attack.

Many younger (and even older) players confuse the order of these objectives. We see examples of players at all levels who make a mistimed or misjudged attempt to tackle the ball only to see a crafty attacker work around the challenge and penetrate the line on their dribble.

Delaying the attacker, closing off options, then closing space may be the best choice. Often, these actions can force the attacker to turn away from pressure, creating the time for the defending team to organize and press as a team.

Developing the awareness of players to recognize angles, assess their abilities versus the opponent, recognize the tactical situation, AND the technique of defending (positioning, foot work and movement, angles) improves the successful execution of the defensive role.

We also note these principles – often associated with the attacking role – but also relevant to playing out of possession:

An important consideration in defining our game model in the middle third out of possession is the positioning of our players at the moment of transition.

In this situation, we are in an unstable positioning of players – there are several opportunities for Blue to attack that would result in numbers-down outcomes going into our defending third. For example, a pass from Blue 7 to Blue 10 would beat both Red 10 and 11 and result in a 3v2 by Blue toward Red’s goal. If Red 5 steps to Blue 10 – and if Blue 10 can pass to either Blue 8 or 9, then Blue is 2v1 to goal.

When we are unstable, we ask three things of our Red team:

To be successful, we need to train our players (in this situation, our center backs) to determine an optimal angle, retreat under control, absorb pressure, determine a final line of confrontation, and step in when necessary. This is a skill that must be developed on the training field in various 1v1, 1v2, and 2v2 activities. Likewise, side-on defending (such as Red 6 might require to engage Blue 10) is a skill that requires learning.

In this situation, our team is in a more stable positioning of players relative to Blue – we are numerically superior in the parts of the field that Blue might attack to enter our defending third.

Our desired outcome is to continue to maintain positioning to protect vulnerable areas while looking for opportunities to recover the ball. In the diagram above, we can observe that Blue is numbers-up around the ball – forming a 4v1 rondo.

In this situation, opponents may look to send the ball forward into our defensive third with the intent to chase down the ball and go to goal (“kick and run”). Our response is to treat the situation as a rondo in the defensive role – attempt to isolate the ball, delay, force play backward, and prevent time and space on the ball or switches of point of attack away from our numbers.

Note that we do not want to overcommit to pressuring – Red 4 and 6 are “cover players” in this diagram. If Red 7 steps forward and the ball is played out to Blue 11 on the wing behind Red 7, Red 4 must be positioned to engage.

We do not want to go from a stable to an unstable position in order to win the ball. An implication is that we need to work on the defensive tactics and techniques in our rondo and positional play activities.

In order to be successful defending in the middle third, our team must be able to create stable positions. Organizing defense on offense means that our team – while committed to creating successful attacks – must be positioned to prevent the opponent from countering if we lose possession.

We want to encourage our 9v9 players to take risks. The expectation is that our players are taking in their surroundings and analyzing opportunities (“perceive and conceive”).  As players mature – learning through the game – they will increase their recognition of potential threats, their positional responsibilities within the game model, the behaviors of their teammates, and execute decisions that balance risk and reward.

In the 9v9 game – with the smaller field size – it is critical that teams maintain a stable defensive position in the midfield. Execution of the principle of Organize Defense on Offense must be balanced with a willingness to accept risk and the development (tactical, technical) of the players. The use of training activities – 1v1/1v2/2v1/2v2, rondos, positional play – and a focus on the defensive role will help build the abilities of the players to succeed in the middle third out of possession.