There are a lot of great options for capturing and analyzing game video. Veo Camera and HUDL are a couple of choices.

Capturing training session video should also be part of the coach’s toolkit. If our training sessions are prep for games, then video analysis of sessions can provide insights into the players’ actions and a platform for our personal reflection and growth.

Here is a short clip from a recent session with MPC Men’s Soccer:

One of the challenges as a coach in a training session – especially if we are solo coaching – is “choreographing” the activities. In other words, making sure that we move from one activity to the next, inserting coaching points, stops/starts, progressions, player management, moving equipment, and so on. Given everything that is going on, there are simply things with the players that we can miss. It’s also tough to be fully self-aware in the moment of our own actions.

Mobile phones provide one method of video capture. I’ve settled on using a GoPro for a couple of reasons – the ruggedness of the device, different options (camera angle, frame rate, resolution), and a variety of options for mounting. Using the Quik application, I can connect the GoPro to my Android phone, control the device, and view on the phone screen what the GoPro is recording.

My current set up includes: Here is a screenshot (not including the 8-foot tripod): 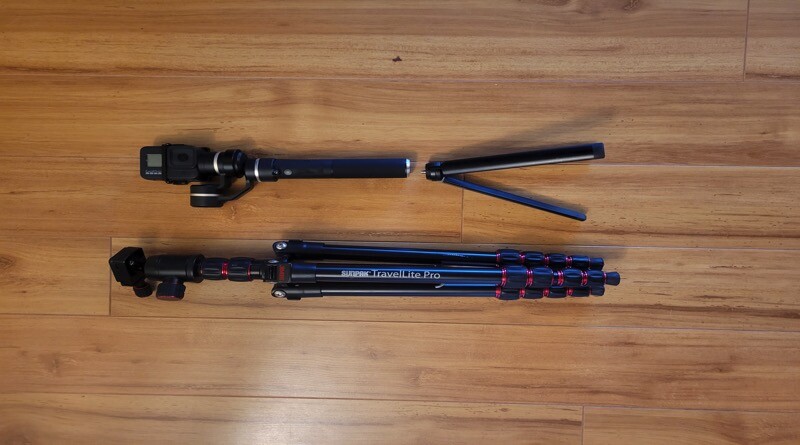 The gimbal allows me to handhold the GoPro and “pan” back and forth without getting shaking on the video. It also orients the GoPro so that it is level with the shot (rather than being off-angle, meaning one side being “higher” than the other – which is annoying). I will typically mount the GoPro in the gimbal (as shown in the picture) and mount the gimbal on a tripod using the built in screws. The G5 has a thumb control for turning the camera left/right/up/down so once mounted I can make little adjustments to get the frame that I want.

I’ve sometimes handed off the gimbal to a parent to record for me although that can be hit-and-miss and may require more coaching of the parent than is desired. The value is that the parent (or assistant coach) can move around and capture actions more closely than from a distant tripod position.

After capturing the video and returning home, I upload the video to my desktop. The simplest way for me is to eject the microSD card, insert it into a USB microSD adapter, and then copy the MP4 files to my drive. I can then use QuickTime or other apps to view the video.

It’s often the case that I will only look at a small part of a training session – perhaps 5-10 minutes – rather than watching the entire video. For example, I may have noticed something on the field but I want to replay it in order to decide if what I thought I saw actually happened. Or, maybe an activity didn’t go as planned and I want to replay the sequence in order to better understand what went on around me and how to improve in the future.

If the objective is personal self-assessment, recording the audio of the session adds additional value. Recording (whether using a GoPro or mobile phone) from a distant position makes it difficult to capture your voice – especially if there is wind or other noise. An alternative is to take the video using one device and capture the audio on a second device, then link the two up using a desktop app. I’ve accomplished this using the GoPro and then turning on my Android phone’s recorder app. The challenge in this process is making sure that the quality of the recording app is sufficient.  A couple of years ago, I used this technique for a course assessment – I ran an entire session, got home, and discovered that phone was moving around in my pocket and the recording was muffled and captured the noise of the fabric rubbing against the built-in microphone.

Video capture of training sessions can be a great tool for personal and team development. Working through what is best in your environment make take some trial-and-error but the effort can provide positive and useful results.