Every session activity should be a gateway to the demands of the full-sized game, aligned to one of more of the player development dimensions. In short, session activities are a process element – a tool to provide players with learning experiences that will support the challenges they will face in games. The decision on scoring methods and the use of goals should reflect the coach’s intent in addressing needs within the context of an overall development curriculum.

The scoring system utilized in an activity should reflect the priorities of the coach and, ideally, direct the players to the coach’s process goals without explicit coaching. The coach should consider the maturity level of the players when designing an activity scoring system – the players must be able to understand the scoring rules and the rules should challenge the players to provide full levels of engagement. The coach should be aware of the psychosocial elements of competition in the context of their team – its age, maturity level – when utilizing scoring methods and determining the consequences of outcomes.

Although we have used the term “goal” which is commonly understood to mean a physical structure of some size with an exterior surface and a net, there are a variety of different types of goals that can be utilized.

It is also possible to have an activity that does not have physical goals. Instead, the activity may define a scoring system that is task-based. Rondos and positional play activities can utilize scoring systems to increase competition and motivation. A common example is the completion of a certain number of passes in a row to score a point. Another example is to move the ball successfully from one zone to another without losing possession. Time may be used as a boundary – completing the most tasks in a certain amount of time or timing the execution of a single task.

The alteration of scoring rules during an activity – for example, requiring a combination of passes to go through a specific player when moving between zones in order to score a point – creates new problems for the players to solve.

In the full-size game, the field is laid out with two identical goals centered at opposite ends of the field. In session activities, the coach has the freedom to utilize any of a variety of types of goals in any portion of the field of any number and with any scoring system.

The use of goals with nets places certain constraints on the players. The size of the goal will have a relationship with the distance at which players can be expected to successfully score, based on their age and ability. For example, many U14 players can score on a full-sized goal from 25 yards. Scoring on a 2×3′ mini-goal from 25 yards is much more difficult. The use of the net prevents the ball from travelling beyond the goal, once scored. However, the net also results in a stoppage of play while the ball is retrieved and play is restarted. It is only possible to score from one side of a goal with a net – as the net blocks the other side. One possible layout is to reverse the goals, as shown below: 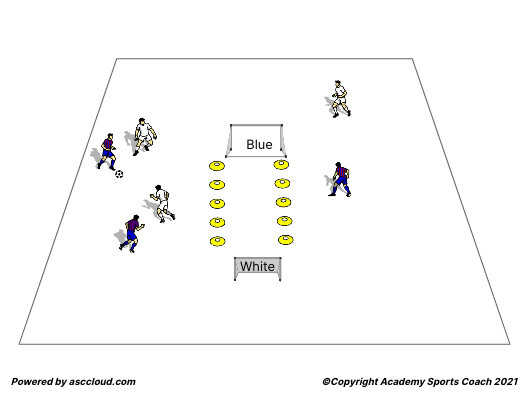 Although the full-size game has two identical goals, a session activity can have an even or odd number of goals. The goals can be positioned in various orientations and act as targets for one or the other of the teams.

These examples utilize netted goals but cones, flags, or poles could also be used. The coach must consider the space surrounding the activity when using goals without nets as the ball will travel beyond target. One possible use of cone, flag, or pole goals would be to allow for scoring from either direction:

The discussion of goals so far has focused on scoring by playing through the goal. There are alternative scoring methods that the activity may instead require in combination with non-net goals. Here are a couple of examples:

Target players may also be used, in conjunction with cone goals to create a free-flowing game. In this case, when the ball is played to an opposing target player, the current defenders come off and a new team enters the game (“flying changes”):

An activity may include multiple types of goals – for example, cone goals which can be passed through and net goals at each end:

As part of the activity design, the coach must determine a scoring system for the game. In the full-sized game, each goal scored counts as “1 point”. In a session activity, the coach may choose to score each goal as 1 point, may utilize specific criteria to add bonus points (for example, a goal off a header counts as 2 points), or may assign different numbers of points to different goals, if multiple goals are available. In this activity, scoring through the blue cone goals counts as 3 points and scoring through the yellow cone goals counts as 1 point:

There are two key considerations for the use of goals and a scoring system:

For example, in this classic 1v1 game with 4 cone goals in which the attacker scores by dribbling through one of the cone goals:

Changes to the dimensions of the space, the positioning of the goals, method of scoring (e.g., stopping the ball versus dribbling through), and scoring system (e.g., assigning a higher point value to the goal not scored in during the next game) will create different challenges and learning opportunities for the players.

The choice of scoring method will have an impact on the demands made on the players:

The use of multiple goals creates a demand on the attackers to scan the environment (positioning of opponents, location of goals) and continuously evaluate threats and opportunities. Attackers may choose to feint toward one goal, moving defenders, then immediately attack a different goal. Defenders must be aware of these tactics and respond accordingly.

Time can form the basis of a scoring system within a task-based activity. In the activity shown below, the two groups of players can compete to see which team can make the most passes in a period of time or which team can complete a specific number of passes before the other:

The scoring system may also define prerequisites – actions that must happen before a point can be scored. Here are some common examples:

An alternative to prerequisites is “bonus scoring” – adding points if a prerequisite is accomplished. This can allow the activity to be more natural while providing an incentive for desired behaviors.

Once a point has been scored, the activity must define how play is to continue (restart). In the full-size game when a goal is scored, the game restarts with a kickoff in the center circle by the team that was scored on. The coach determines in the activity the rules of the restart. Here are some examples (“attacker” is the scoring team, “defender” is the team scored on):

It’s also important to determine how scores will be tracked and how the outcome will be determined. There are three choices:

If players keep track, they can either keep score in their head or use an off-field scoreboarding method (using cones, a whiteboard, or some other way to tally).

While we have discussed the used of points-based scoring, other methods of competition can be utilized, particularly with younger players. Variations of tag and knockout games in which the “last” participating player(s) is(are) the winner is a method.