The basics of the athletic stance are as follows: 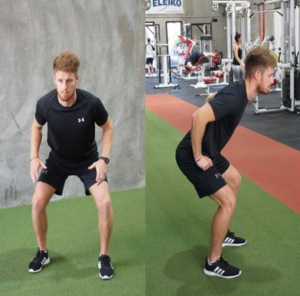 The athletic stance creates tension much in the same way a spring has tension when it is slightly stretched. Sports scientists use the phrase “stretch-shortening cycle” (or SSC) to describe the effect associated with the athletic stance and similar body positions. In the athletic stance, the muscle groups of the calf, hamstrings, and glutes (buttocks) are slightly stretched, creating tension and stimulation of the muscle elements. When the muscles are then tightened (hips, knees, ankles are straightened), the energy is released. Research has shown that the use of the SSC effect creates greater power than a simple muscle contraction.

A number of athletic elements of soccer are positively affected through the use of an athletic stance:

The athletic stance supports loading of force through soft-tissue rather than directly in joints (specifically, the knee joint) – reducing the risk of placing the knee in an unsafe position which may result in injury.

In addition, the athletic stance is a basic movement in resistance power/strength activities such as deadlifts, squats, and kettlebell exercises.

The use of the athletic stance is common in the following situations:

The athletic stance is a critically important part of 1v1 defending, where the player must be able to respond to moves initiated by the attacker while staying engaged and within a pressure distance.

Maintaining the position during movement – avoiding crossing the feet, standing tall too early, putting too much bodyweight on one foot, or losing balance – are all important parts of effective performance in the game.