Taking Shaping the Game to the field

The Shaping the Game activity (StG) is designed to develop a specific tactical idea – positioning, cues, movements, and the response if the idea is “bridged” (opponent succeeds in overcoming the challenge and creating a new problem). The UEFA C course requires 12 different StG activity plans encompassing 2 options of the following in the 4-3-3 formation:

At the UEFA C assessment held by the Scottish FA in Edinburgh in early December 2021, each candidate was required to coach to a specific option for an assigned theme. This article describes my experience working with the Midfield 3 defending theme.

Creation of the activity

The Scottish FA (SFA) use the ASCloud activity planner. ASCloud is a web-based application used to design and describe session activities. Coincidentally, 205 has been using ASCloud for activity design for the last several years.

SFA have a corporate license which includes custom session planning tools. The StG activities for a given theme are combined into one session plan which is submitted to their UEFA C course management portal.

StG activities must follow a specific set of guidelines (described in more detail in this introductory article):

The use of 16 players correlates well with the numbers that many coaches encounter in team training sessions. It would be simple to add more players to a StG activity. Deducting players would – in many scenarios – detract from the behavior of the activity.

An unwritten guideline – discussed on the field by the assessor – is that the activity must embrace “realism” in its deployment of the players on both teams and the instructed actions. This makes sense – false constraints, inappropriate ball movements or player positioning take away from the learning acquired by the players.

Here is the drawing and description that was submitted for the StG option that I was required to present: 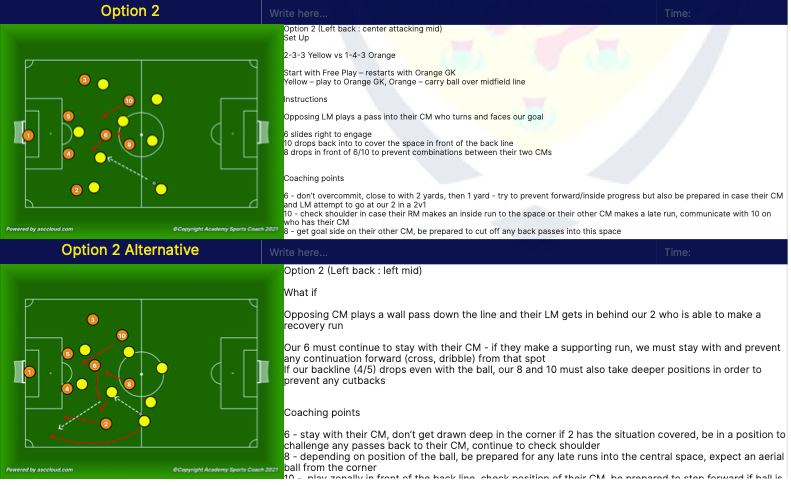 In the first case, the ball is played into the opposing midfielder (10). Our defensive midfielder (6) steps up to press, deny the turn, and ideally push the ball back. In the “bridged” (alternative), our 6 is too slow, the opposing 10 turns and plays a ball behind our back line.

Organizing on the field

Due to the unfamiliarity of many of the coaches with the choreography of an StG activity, the first few groups were highly interactive with the assessor “coaching the coaches”. Later sessions typically involved less intervention.

Our field space consisted of a full-size half field with a goal.

At the start of each session, each of the 2 coaches presented their activity on a tactical board as a method of describing to the “players” (other coaches) the intended activity, alternative, and movements.

Once on the field, the activity started with a free play segment. A demonstration of the option and alternative were provided. Free play was resumed with the coach executing a stoppage at an appropriate point to demonstrate a correction aligned with the theme option.

I was fortunate to be in a later grouping and had the opportunity to observe the instruction by the assessor. It was quickly apparent from the feedback given to other coaches that my activity as originally designed lacked “realism” in its initiation. Here is the original diagram:

The problem is that the opposing player on the ball (Yellow 3) would not just pass to a teammate with open space in front – instead, they would more likely carry the ball forward with the teammate (Yellow 10) making an overlapping run to the wing or a covering movement behind the ball. In short, this diagram is not realistic.

Given the need to maintain a headcount of 16, it was necessary to move one of the existing players. I chose to switch the attacking right back to the defending team as a right forward:

Play initiated with the defending midfielder – Yellow 6 – who was instructed to swing the ball wide to Yellow 3. The presence of the Red 7 prevented this player from carrying the ball forward.

With this adjustment, we put the activity on the field. The key player in this activity is the Red 6 who must close space when the ball is played in to Yellow 10. The Red 8 is instructed to drop into Red 6’s space and Red 10 is instructed to slide central and pick up any runs by the opposing defending mid as well as cut off any back passes if possible. Both players are also told to take open body shape positions and check their shoulders for movements behind them.

The “what-if” in the activity is when the Yellow 10 is able to turn and play a ball down the wing. In this case, Red 6 stays with Yellow 10, the back line naturally drops to prevent a cross or run to goal, and Red 8 and 10 drop to maintain distances.

The end goal of the activity is to provide a realistic presentation of the game. There were 2 points made by the assessor at the beginning of the day that were relevant to coaching this option:

In regards to “coaching and managing”, the success of creating a realistic environment for the midfield players is dependent on the actions of the players behind them and the challenges presented by the opponents. In the real game, we expect our center backs to communicate with our defensive mid on when to press, direction, and letting them know that they have cover. We would also look to them to “call in” the opposite midfielder to cover the vacated space. In my session, I had to remind the center backs and goalkeeper of their responsibilities in order to maintain fidelity to the activity.

It was noted in several of the earlier sessions that during StG, teams have a tendency to “deflate” – lines compressed in unrealistic distances – when activities recycle (and when players fatigue). For example, a 12 yard separation in the first cycle can turn into a 5 yard separation in the fourth cycle. A specific action during the recycle – for example requiring the ball to be played a couple of times between the deepest opposing players – can facilitate the reset of the defending lines.

Coaching is often a matter of adjustments – to the players, the opponents, the referee, the environment, and other factors out of our control. In this StG field session, the original activity plan was flawed and adjustments were required – to meet the expectations of the assessor and to apply a realistic set of actions within the learning environment.

The StG framework provides a structured method for developing “bite size” tactical ideas within a team structure. The elements (rules) of StG allow coaches to utilize typical player numbers in a realistic manner. I am looking forward to adding the StG methodology to our team training activities.

Here are two TacticalPad videos from this theme – the original and the alternative – to provide some context to the activity.