This session involves a variety of activities that involve movement off the ball and changing the point of attack. The double grid rondo involves coordinated movement of the ball and team between spaces. Ask the edge players to backpedal and time their movements rather than carrying the ball between grids. In the river game, the defenders should attempt to isolate the ball when entering the grid. In the overlap game, encourage players to take risks when coming forward, communicate together to determine who is pushing and who is covering. 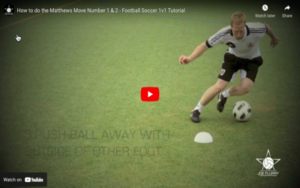 5v2 side by side, the river