The focus of this session is to develop midfield combinations of play. The step over skill is one that midfield players should utilize in order to create space and change direction - often when trying to feint into pressure that brings a wide player into the game. The 1v1+2 activity rewards the attacker that can connect with the wide players who join the passer to ideally create a 3v1. The 3v3+2+2 rondo pits 3 against 3 in a midfield space with 2 wide players. A progression would require the player on the outside to switch with a central midfielder when receiving a pass. The 4v4+4 is a classic  - look for the movements of the 4 central players to read off each other, form angles of support, recognize central pressure and opportunities to play end-to-end. The 6v6+2+2 is a game-based variation of the 4v4+4 - the central players should look to advance the ball when possible but also utilize the wide players to open the field and move opponents. Encourage the team in possession to show patience and develop a tempo rather than rushing forward.

Step over, reverse - outside 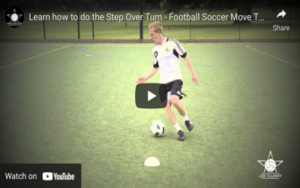